Well as promised I have a few piccies to show you that took of my new slaves. 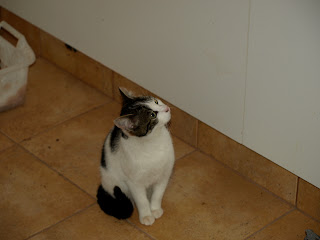 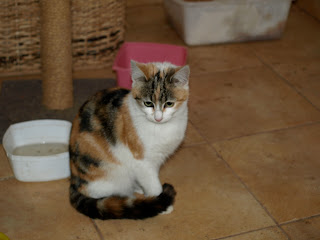 At first I wasn't too keen on the idea of more of my kind here, I was enjoying having 100% of the farm peoples attention, and not just 95% when Tommy was still with us! (on a side note, I do miss him a bit, just don't tell anyone!)
One of them looks like me too!! I was especially not happy with that. They haven't been named yet- the farm people are undecided.
The way I figure, I will ALWAYS rule the farm, and therefore have ownership of inside the farm house as well as outside. The 2 sisters will be given mainly outside duties, including nightshift. And besides, daddy has made it clear that his love is totally devoted to me only!

Over the next few weeks I will be training them in the fine arts of patrolling, guarding, as well as the all important 'species control'- hunting vermin that shouldn't be here, like rabbits and mice. I will, out of necessity, also educate them on NOT what to hunt- the other farm's guard dogs, foxes and magpies in spring (yes they have already started swooping, check daddy's ears for proof...)
-psyching them up for training- 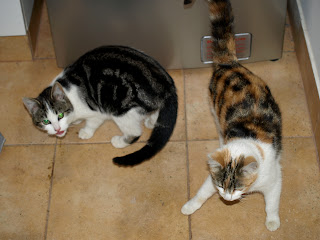 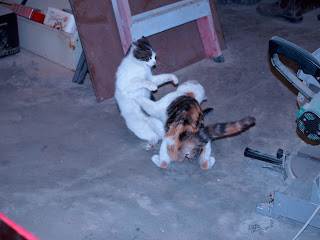 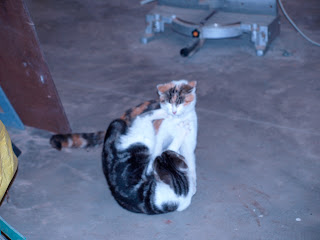 Daddy goes over to Hobart next week for a little while, I have assured him the new troops will be ready for deployment by the time of his return. I was offered to go on the trip too, but I'm not too keen on airports anymore...

I have lobbied to have a tall perimeter fence constructed to keep out the border jumpers in the area, (they like the lifestyle and opportunities here better.) Its been finally approved, but only for part of the boundary?! Silly if you ask me, we would just be creating a giant doorway in reality! It doesn't matter anyway, because the farm-people committee can't decide on funding. Updates to follow.

Also, on the topic of additions to the farm, Billy the goat is now a proud father of 4 new kids!! Yay, I really like Billy and his family. They work hard to keep the weeds and blackberry bushes down to a minimum. Here's just one pic, daddy will tell you more about last weekends birthing stories in a few days. Poor daddy, he's been so busy lately- and will be for another week before he holidays in Hobart. He hoped to visit PABLO, and his house people too. 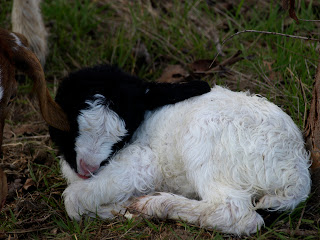 Some days I just cant be bothered! Theres lots of patrolling to do around the vineyard and creek, but stuff it, it'll still be there tomorrow... 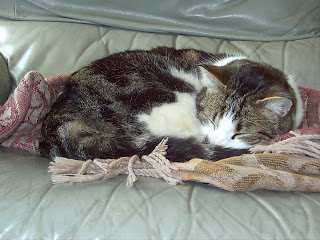 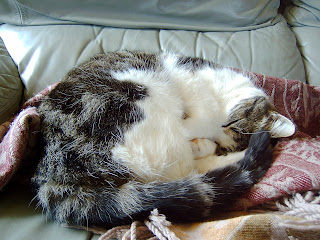 Ok, that enough, let me sleep. 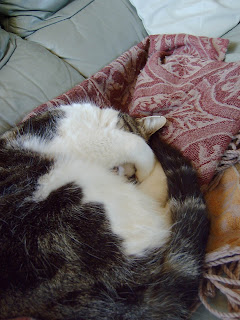 Seriously, go away, i'm gonna hide from you now... 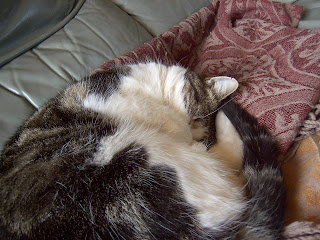 Daddy got a new camera!! Its a flashy digital SLR, with all the buttons and disferent lenses and stuff. Cool huh. Now he take lots of good photos of me, and not crappy pics with his old toy campact digital. Here a pic I got from the website: 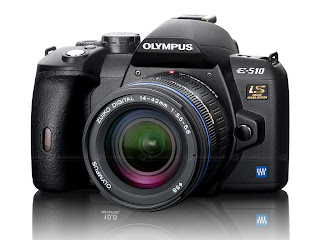 He hopes do alot of landscape and night photography, as well as some general photos. He may even be able to do some contract and freelance work too!! We cant wait to show you the results.

Attention everyone!! We have 2 new additions to the farm, and they're just like me!!

They haven't been named yet, that will be Nonna's job. Daddy bought home 2 adopted kittens, they're sisters, and only a few months old. They had no home, so daddy and Nonna thought there would be plenty of room here for them. Pictures to come soon!!
Posted by Axel and Manny at 4:01 pm 1 comment:

Id thought Id start with Busta, the american pit bull terrior, as he is the latest member of the clan. Daddy bought him not long ago, and he has settled in very quickly, though he still has a few issues with Butch, the other dog.Let me make one thing clear from the start, I don't like him! I don't mind Butch too much, but Busta is just a big meanie!! He behaves and adores the farm people all the time, but tends to always want a taste of me- he was adopted, and the farm people think he was allowed to 'sample' the suburban strays in Melbourne...
But, putting my differences aside, I have to respect for 2 main reasons. 1st, daddy adores him, and thats good enough for me. 2nd, he makes my job easier! I don't need to do much of the muscle work here anymore, he's the 'Estate bouncer'.
So here's a few quick pics, as you can see, he's still young and will get bigger, he's obedient, and damn ugly!! 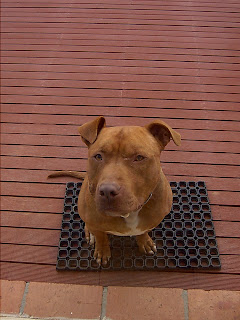 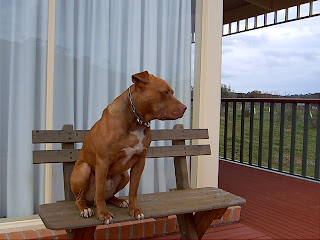 Hitler Kittens- or 'Kitlers' for short, have there own website!! You must see them here

I think there quite funny and cute. I havent been able to post much lately, daddy's been away lots and i need his help with typing. Daddy says he will try to help me out more now, but he still spends alot of time using me as a furry hot water bottle that never goes cold- its winter where we are!!

Too Close DAMN IT

Sorry that its been a while since my last post, daddy has been sick, and I need his help when typing.

I havent used many pictures so far on my blog. Theres two reasons for this. Fistly we only have dial-up at the farm! (shock-horror!) and dad's camera is a bit crappy. Heres a few examples:

See, its all white flash from my coat 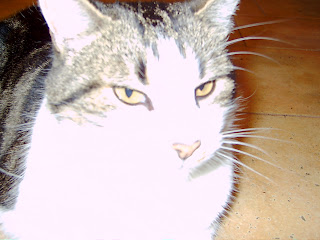 Woah, that was so close it blew my ears back! 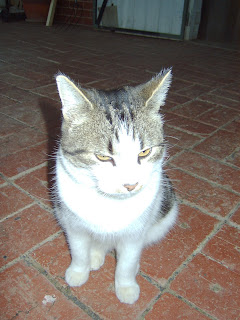 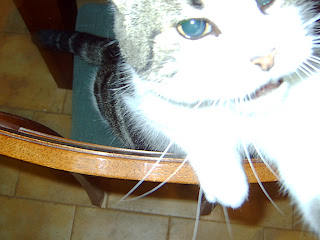 Ok, so that last pic was my fault. Dad was trying to get a nice photo of me on the chair, but I had one of my 'Dr Jekyl' turns. I get confused, sometimes I think I'm a jungle-cat. It must be the farm air...
Posted by Axel and Manny at 9:56 pm 9 comments:

What this?? A road map to peace, or is daddy going to Europe??

I didnt want him to take over MY blog with all his bike stuff and blabbering about plans of tours through the Spain, France, Austria, Switzerland, Belgium and Italy, so I insisted he gets his own!

There not much on there yet, but stay tuned.

Daddy was on a long walk today- right around the boundary of the whole farm. He is putting together an evaluation of all the fences, and getting prices on new materials to replace\repair it all.
It is quire common to see feral rabbits, kangaroos, the odd possum or fox. Wombats are everywhere and are actually quite a problem here.
But, when waltzing thru the bushy area right on the back paddock, he bumped into a deer!! Incredible!! Its unheard of in this part of Victoria. He said that at first he thought it was a cow, because it was very big and brown, and the neighbours cattle often come thru the fences. Then it saw daddy, and ran away very fast.

This is the bit I really like, daddy is soooo brave and macho. (ahem) He got his, um, 'camera', in order to, 'take a photo', of it. It was of course a long way off by now, into the forest. But daddy is a seasoned bush-man and a good tracker. He found its trail, and started to track her. (its a 'her', it had only snubs for horns) He said it was quite hard, because the tracks are similar to other animals that roam the same grounds. But deer tread their left and right hoof's very close together. He tracked it for 2 hours, but had to leave her to be, it was getting dark and he knew I was getting hungry back home...

Hi all. Just a quicky to say 'check out my editted banner!'

If anyone has an idea for a profile pic for me, or likes a pic I've already posted, or better yet has pics of me and\or daddy, let me know